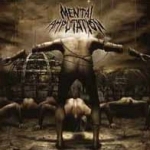 Some time has passed since the release of “Mass Crisis”, the first MCD of the Swabians MENTAL AMPUTATION, but doing something the right way always needs time. In case of MENTAL AMPUTATION I think that this five piece has done a massive step in the right direction. The production is really heavy with a nice 90s Florida Death Metal like flair. The band recorded at Sound Art Studio (Rosslau) where also PURGATORY did their “Luciferian” strike. Materialwise MENTAL AMPUTATION have some really remarkable riffings with a positive vibration of good old BRUTALITY, MONSTROSITY, the classical middle phase of DEATH and also a minor but representable European touch in terms of melodywork remindable to PESTILENCE or some Scandinavian bands, too. Shortly said expect a brutal, but still varified dose of Death Metal. There’s some really well done guitarwork to be found here. In my personal impression they even overact a bit in terms of lengths of soloworks and also a bit more compact tracks below 4 minutes would increase the deadlier effect, shortly said a bit less would be a bit more in positive sense. A hard time I have with the for my taste too deep growled vocals that have too much of this modern Death / Grind style. In some way I think that a more darker Death Metal vocalstyle with a less upfronted mix in the production would fit better to the songs. But those are all in all minority issues that don’t ruin this really well done next step. As well I appreciate the for Death Metal genre original done intro and the ‘Exit… To End’ instrumental comes also close to a really intense atmosphere. If you like digital designed art you’ll also have a pleasure with this one done by www.davidho.com, it’s dark, but nothing clicheed. For a self-financed release “Utter Subordination” is done with a lot more dedication and heart than some label releases, so a it’s a pity to see that German bands still have a hard time to stand in labelwise. Hope that this release doesn’t suffer from the ignorrance often to be found within the brutal Death / Grind scene, so get this one from several mailorders or directly from the band via www.myspace.com/mentalamputation.