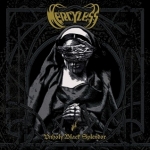 When it comes to French old school Death Metal (and extreme Metal in general) this four piece outfit from Mulhouse belongs to my personal favourites besides their country mates MASSACRA. In my humble opinion their first two albums "Abjected Offerings" (1992) and "Coloured Funeral" (1993) have some cult potential and I always give them a spin in my disc player from time to time. The horde, which was established in 1987, unfortunately headed into a different musical direction after their two classic albums and totally fell from grace with me. The 1996 output "Cold" and much more "Sure To Be Pure" (released in 2000) can be considered as utter crap. So it was just a matter of time when the band would vanish into thin air as the members quite obviously lost their interest and vibe for what Death Metal was all about. The band logically split up in 2001 but to my surprise they reformed after a hiatus of one decade. The two remaining original members Stephane and Max recruited two suitable comrades-in-arms and were busy in getting back to business again. Finally the wait is over and the quartet unleashed their new long-player upon the headbanging masses a couple of months ago (October 2013). "Unholy Black Splendor" is a monster of an album and it seems that MERCYLESS has regained their old spirit. The French masters are hungry for Metal of Death again and deliver us an aggressive and technical top notch alloy spiced with some fresh ideas. This monument is full of hatred and (almost) in the same vein as their first two releases – just a little bit more matured in its execution. Right after the cool intro is over the ten tracker kicks off with ‘I Vomit To This World’ providing razor sharp riffing and a dense wall of sound generated by relentless axes and thundering drum work. The entire album keeps up the same quality throughout the songs. It is mostly mid paced when it comes to the speed department with faster eruptions at the right time of course. The speed is used in an intelligent manner here. For example the title track convinces with killer mid pace brutality while ‘Probably Impure’ adds some more speed to their violent compositions. ‘Abscend Belief’ comes up with some quite beefy riffs almost scratching SUFFOCATION like spheres. An overall blackened atmosphere on the album can’t be denied as well… fucking dark stuff indeed which is additionally highlighted by a superb cover artwork. All is wrapped in a very dynamic and powerful sound (mixed and mastered by Dan Swanö) which should please every Deathbangers’ ears out there. To sum it up: "Unholy Black Splendour" is a mighty return by this French cult act. So if you are into tight, high class Death Metal with a blasphemous touch then you should immediately check this one out. Welcome back guys! For more info please visit either www.facebook.com/mercylesscult or www.trendkill.fr.