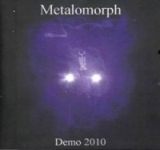 Metal from Israel isn’t what we are hearing the most of. There are of course the old bangers in SALEM and MELECHESH, even though the last mentioned moved on to Holland. Besides that, we aren’t getting much news or Metal from the Israeli scene thrown at us, from bigger labels. METALOMORPH is a new acquaintance from the holy land delivering lethal Death / Thrash, in a very old school and noisy manner, half American, half Australian inspiration it seems. The music is very guitar driven and we get a healthy dose of well composed riffs. Perhaps not the most original riffs, though they work in this context and are put well together with the rhythms and progression of the songs. The music is still very raw and it can be heard that METALOMORPH hit the studio without having vocal lines or bass lines prepared, but improvised it along the way. The bass is rumbling along the bobti-bassdrums and the vocals are a mere dark whisper here and there. I don’t know if it has been the plan all along, to only use the vocals sparsely. Though a more frantic and in your face aggression from the vocals would have done, the at times aggressive guitar riffs good. This first output from this one man band is quite enjoyable, the ideas and the riffing are killer and with a little more work and a bit more inspired and little less monotone drum and bass work, and perhaps some more aggressive vocals mixed with the hellish whisper, that is used now – we have a new contender for the dark Death / Thrash throne. www.myspace.com/metalomorph