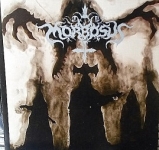 These "bestial" bands keep popping up out of nowhere, like the most useless mushrooms after the rain, and you better don’t expect them not to suck. Better don’t expect them to have any decent and fresh ideas, either! Well, it would be naive to expect the EP "Black Death Commando", which was recorded by "Burner Of The Cross" and "Infernal Commando Necromansy" not to be a pile of cliché crap, wouldn’t it? The band’s name already indicates how much creativity they have. In short – expect the 958618923415789th example of cloning the usual suspects, such as BLASPHEMY, BEHERIT, ARCHGOAT (there is even a track called ‘Funeral Rites To The Archgoat’… *facepalm*) and VON. To make this trendy crap nowadays is not much more daring than feeding pigeons in the park next to your house, and these 5 tracks sound as effortless, uninspired and overall faceless as they get. The song that stands out most is definitely ‘Hellthrashers’ (*double facepalm*), because the vocalist’s attempts to make high pitched screams à la Tom Araya are so horrible that it’s almost funny. It’s still sad that such garbage exists, though. If you got an impression that this review is just intended to mock the whole "bestial" trend with disrespect and this band is just a scapeGOAT, you can check out this release on the band’s bandcamp and waste 18 minutes of your life on it. Otherwise – avoid it like the A.I.D.S. infected transvestite whores near the main railway station in your city! All further info at: www.facebook.com/morbosusblackdeathsudamericano, https://morbosus.bandcamp.com, www.facebook.com/sonsofhellprod