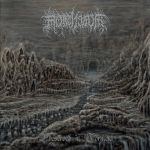 Ahhhhhhh… Pure old school Death Metal. Nothing better in this particular genre. And MORTIFERUM nail it. If there’s anyone who listens to this and doesn’t at least appreciate its goodness, then I’m at a loss for words. With only five years of existence and one full-length to their credit, Olympia, Washington’s MORTIFERUM have proven they have the knowledge of what the early bands were trying to accomplish. None of this screamo shit. None of this tech-death stuff that can go either way. Just solid, grimy, mostly mid-tempo Death Metal. “Preserved In Torment”, with its outstanding cover art depicting a rotting wasteland of dead souls, is down and dirty from beginning to end. ‘Eternal Procession’ kicks things off with murky death-growls, waspy guitars and plodding drums that remind me of bands like INCANTATION or FUNEBRARUM in different instances. ‘Incubus Of Bloodstained Visions’ (what a title!) is along the same lines briefly before erupting into a rapid-paced, decaying mass of putridity. In all honesty, their sound is why we chose Death Metal to start with. ‘Seraphic Extinction’ is a slumbering track that’s heavy as hell while creeping along at a snail’s pace. ‘Exhumed From Mortal Spheres’ charges forward at a much faster run that’ll most likely cause you to flip over the nearest table. Just be sure to remove your bong and liquor first. The fifth track ‘Caudex Of Flesh’ is back to the slower rhythm but still crushes regardless. And the final album-ender ‘Mephitis Of Disease’ contains the 40-minute album in a nice little globe of consistent headbanging. You know those albums where the first time you listen to them you’re praying to the demons below that the band won’t screw it all up in one mishap? This is one of those albums. And from beginning to end it’s exactly what I wanted to hear. No fuck ups. Just pure Death Metal at its finest. For more info, check out https://mortiferum.bandcamp.com, www.facebook.com/profoundlorerecords