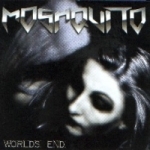 The East German Thrash legend MOSHQUITO is back with their second album! Founded in the mid 1980s in the communist part of Germany the band released their debut album in 1998 and the follow-up proves that long experience pays out. But if you remember their early demo songs like ‘Mosh In Moscow’: forget it! There are 15 years in between and MOSHQUITO obviously don’t want to live in the past. Their vocalist sounds a bit like Max Cavalera and the whole album is in the vein of bands like MACHINE HEAD and Co. But although I prefer fast in-your -face Thrash by bands like EXODUS and EXCITER to this modern style, “World’s End” convinces me in the end because despite all these modern, aggressive and sometimes even kind of progressive grooves, MOSHQUITO don’t neglect the speed factor either. And from time to time skillfully used acoustic guitars and keyboards make this CD sound a bit more easy. Good one. If you don’t resent a more modern kind of Thrash Metal: check them out. MOSHQUITO are good enough to be talked about not only because of their cult status! I wonder if they still cover ‘Penny Lane’ on stage.