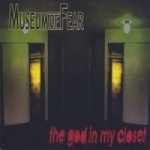 MUSEUM OF FEAR
The God In My Closet
(Dirge Records)
27:19min

This record was giving me a hard time… Not because it is bad or anything, but simply because of the fact that MUSEUM OF FEAR created such a unique brand of music, that it’s extremely difficult to find comparisons to their sound and style. Their own slogan "Heavy but not Death Metal, emotional but not "Emo", melodic but not poppy, progressive yet accessible rock music for fans of A PERFECT CIRCLE, PORCUPINE TREE, RUSH and JETHRO TULL" should give you a little hint already, even though I personally don’t hear any similiarities to the bands mentioned (except for their own individual uniqueness maybe). If your musical roots are located in traditional Metal, you certainly might be interested to hear that MUSEUM OF FEAR is the follow-up band of Power Metal gods APOLLO RA, a band that created the "Ra Pariah" masterpiece in the late 80s! Unfortunately this powerhouse split up, or better evolved into something new, which they decided to name MUSEUM OF FEAR (a wise decision in order to avoid disappointments within the ranks of their old fanbase). While the band’s debut album "Post Hypnotic Suggestion Box" (recorded in 1995) still offered some little APOLLO RA ingredients here and there, yet already showcased the band’s strive for originality, this new 6 song effort is obviously the next logical step in leaving behind their musical past completely now. From the glorious APOLLA RA days only vocalist Dan Miller and guitarist Bill McKeown are left nowadays, who decided to hire a bunch of session members for this release (one of them is APOLLA RA drummer Steve Albinak). Musically MUSEUM OF FEAR anno 2007 walk the paths of experimental, progressive Rock (hence probably the aforementioned comparisons) instead of crushing Metal. In their writing melancholic, partly quite dark melodies go hand in hand with an overall very emotional vocal delivery, courtesy of Daniel Miller, while the songs offer a lot of different feelings and a very relaxed atmosphere. Kinda strange that they decided to re-record the "Post Hypnotic Suggestion Box" track ‘Mindwheel’ for this release, as it does not differ too much from its original version (apart from the more upfront bass in the production maybe)… You’ll probably need a few listening sessions until you really manage to appreciate their material from start to finish, but if you’re open minded enough it’s definitely worth the effort. My only complain is the production, which still leaves a lot to be desired (the band’s constant problem ever since the APOLLO RA days). For more info and soundsamples head to their myspace domain www.myspace.com/museumoffear. For ordering details check out the label’s website www.dirgerecords.com.