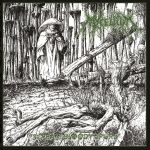 MYCELIUM is a one man band that was formed in the age of pandemic, in 2020 in Scotland. Quite interesting the only other band from this musician was more in the Black Metal realms, whereas this is strictly a Death Metal band rooted in the old school. It is obvious by the title of this album what you can find in here. While this has a programmed drum sound, it is quite well done and you wouldn’t notice it is actually a computer file doing it. The sound is a bit muddy but again, sometimes this only helps the band to achieve their goal. The guitars are low and cavernous, yet the riffs are there and it can be heard. Vocally it is just low growls that are not bad, not great, they just do the work. Although the band usually plays fast, they do sound a lot better at upper tempo in a way that can be compared to OBITUARY with probably less doomier moments. The cover art is also quite good for what this album is all about, which is basically about death and fungi. Yes, the lyrics deal with subjects mixing losing life and the infestation of spores, while also making some reference to other Death Metal bands. ‘Stipe Full Of Maggots’ is just one example. The first listen to this album left me with the impression of just a good band, but after some more listenings those little fungi things and details lost in the first autopsy arose to create a better infection. Fans of early Death Metal cannot go wrong in here. If anything, approach with a face mask… you have been warned! www.facebook.com/myceliumband, www.facebook.com/ibdc666