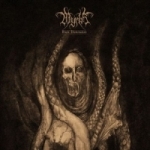 Welcome to the new release from one of the most tasteful Black Metal labels existing today – Debemur Morti. Releasing quality offerings almost without a fail, this label one more time treats us with an album of deep dark magic. MYRKR is a horde of two coming from Ireland that will, with their debut "Black Illumination", literally take your breath away. Yes, I said horde although a band is comprised of only two members. Because, the sound they developed is so complete that you will wonder how could only two guys do it. It is massive, choking, calm and killing. This is a serious Black Metal without mercy for the meek. As one of the members is also the mastermind behind SLIDHR we cannot talk of lack of experience here. The music is very heavy Black Metal with the occult written all over it. So many bands try to make an occult statement but here it is evident without superfluous external imagery. Esoteric is hidden in the place where it should be concerning the media – in the music itself. MYRKR’s outlook on life is dark, of course, its blackness pressing heavy on my shoulders from the speakers and draining life out of me. This statement is only half true – the other half is is the life-enrichening joy that I felt upon hearing someone else taking the responsibility from me to express my own hidden world and letting me wallow in it for free (well almost). MYRKR’s album is in its essence akin to NASTROND’s later output (who are also their labelmates and with whom they released a split). But where NASTROND are more suffocating and doomy, MYRKR are more clear and spacey. And, as to the existential part of the feel, the bleakness of MYRKR is slightly easier to digest. The reason why we can still breathe when listening to this record is a Necromorbus-styled production that gives us room without cutting off heaviness. It is a small wonder to make a record this pitch black and heavy yet to do it with a certain gentleness that will not scare the listener away. We are treated with the furious guitar attack backed up by the blasting of drums, and yet in a few moments transported to the calm shores of some underground marsh by the slower parts that resemble a kind of sick inverted meditative state, without ever losing the edge in the process. The vocals are of a special kind – they are hard to describe since they change throughout the songs, but if I would be pressed I would say that they are indifferent, thick, deep and very sinister on one side, and direct, shouting and immediate on the other. They fit well with the music, coming from a mysterious place indescribable by words and always with an aura of mandrake hallucination. Character is evident in every nuance and follows the song structures like a twisted venomous monster breath. On the plus side there are also a great cover art (which I used for a desktop image from the day I saw it) and track names such as ‘Black Blood Of The Wolf’ that transport the listener to another place even before the music starts. On the minus side – well, I couldn’t find the words to fill a blank space. For me, this is the first true Black Metal album I have heard in 2009 and the others will have to be really great to outdo this one. www.debemur-morti.com, www.myspace.com/blackillumination