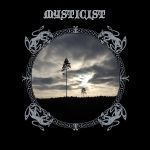 “Mysticist” by MYSTICIST is a full-on 42 minutes venture into atmospheric and mysterious ambient territory that will certainly be a revision of the legendary creations by MORTIIS. Those who venture into the epic and transforming terrain of dark ambience and lured by its atmosphere, must have been exposed to the records like “The Song Of A Long Forgotten Ghost”, “Født Til Å Herske” and “Ånden Som Gjorde Opprør” released during the 90s. These records not only built an effective atmosphere but also produced some actual music of worth. My own experience of ambient music is somewhat limited but what MYSTICIST creates here is engrossing dark ambient music very similar to the ambient projects of MORTIIS and LES LEGIONS NOIRES, the French Black Metal band that released loads of demos in the mid-nineties. In this record, MYSTICISIT retain that dark, cold, atmospheric, some would say medieval vibe that many bands such as BURZUM, SATYRICON and of course EMPEROR implemented into their music. The music here is simplistic and repetitive, and trance-like. The synthesizers really dance around like a full orchestra and work as such. Some would call this boring, but if you know a thing or two about musical composition, you will enjoy this and tracks like , ‘The Stairways To Beneath’, ‘The Duskships Are Coming’, ’The Court Of The Beneath Approaches’, ‘The Forgotten Shore Beneath’ and ‘The Chambers Waiting’ will simply establish the composing strength. And the way they bring the atmospheric rendition into ‘The Mire At Dawn’ to ‘The Mire At Dusk’, will let you wonder their depth of imagination and may led you keep wandering into the realm created by this mysterious Swedish entity MYSTICIST. Without any doubt, exploring this whole creation is like being put in an enchanted forest which can be dark, and can also be friendly; which with every twist and turn brings visions of the great past into its listener’s and observer’s mind. Explore the whole release at https://ironbloodanddeath.bandcamp.com/album/mistisist and visit their label page www.facebook.com/ibdc666