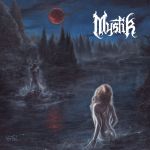 A nostalgic Heavy / Speed Metal barrel made up of warrior ladies in this modern period always sounds interesting to explore. MYSTIK, which started in 2016, cultivated all that grand old spirits inside and devoted the name with great credibility and dedication, for which they are now appreciated as one of the new hopes within the Swedish Heavy / Speed Metal movement. Singer and bassist Julia Von Krusenstjerna, and fellow guitar ladies Beatrice Karlsson and Lo Wickman forged the bond and after releasing a demo tape limited to 300 copies in 2018, Lo Wickman left the formation. Behind the drum remains the only male member, Sven Nilsson (of MIDNIGHT STRANGER, EVISCERATED, WITCHGRAVE and ANTICHRIST). The album was recorded in Studio Endarker, Norrköping, Sweden, under the experienced Magnus ”Devo” Andersson of MARDUK and will be released in co-operation with I Hate Records. At the primary exposure, numbers like ‘Nightmares’, ‘Gallows Hill’ and ‘Ancient Majesty’ are bound to be played on repeat from the beginning as in this record classic, distinctive Heavy / Speed Metal material encapsulated and delivered by this group led by the passionate seemingly mystifying vocalist / front-woman Julia von Krusenstjerna, who must be possessed by a spirited singer from the 80’s, as her vocal throwing twists and untimely husks will linger with you and provide a weird sense of craving for repeating again and again (is it just my impression, or does she often sound like a young Doro Pesch during her WARLOCK days? – Frank). The album is not very long, with eight full-featured titles sharing a total of 36 minutes, and ending with a short, closing outro ritual. The strength and richness of this record is uphold by the guitar themes (especially guitar solos), which will entice the listener in the entire album, with a retro production in a modern shell. This perfectly can be experienced in the traditionalistic ‘Lake Of Necrosis’, the rage of ‘Hellish Force’ and the enchanting ‘Bleed For The Night’. “Mystik” is without any doubt recommended for those who have been passing enough time with their WARLORD or OMEN releases year after year and are looking for something reminiscent from that time period delivering with creativity, vigor, loyalty and spirit. MYSTIK are building an unconventional, self-assured and potent force which shall keep spreading nostalgia Heavy Metal material inclined towards classic Heavy / Speed Metal and enchanting its growing followers with their musicianship and vision. Explore more about the band at www.facebook.com/mystikswe and visit their label page: www.ihate.se