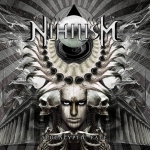 French Death Metal quintet NIHILISM founded in 2009. They released their first six track demo EP “Twelve Thousand” in 2011. A few years later, in 2014, the split LP “Something Old, Something New, Something Borrowed” with DEHUMANIZE was released. After releasing both records independently, in 2016 NIHILISM released their debut full length “Beyond Redemption” in co-operation with Overpowered Records. NIHILISM play crafted well made Death Metal, which comes straight to the point. That means no gimmicks, such as Progressive or Core impacts, but Death Metal, trained in European and American role models where DECIDE, BLOODBATH, MORGOTH, VADER, BEHEADED, even DEATH comes to mind. Recently these artists from Thionville cumulating 10 years of experience, and to celebrate that, they resurfaced with their second album “Apocalyptic Fate”, now released in co-operation with Great Dane Records. It seems like the quintet took the queue from the last song of their debut full length and created 11 Metal perforations to attack the speakers and cervical from the first to the last second. All songs crafted with their own singularity and without any redundancy. The musical composition is neat, in one and the same piece and the rhythm sections offer high quality, which lifts all the songs to an elevated level. The opening track immediately sets the tone for the rest of the album; precise and striking old school technical Death Metal with captivating riffs, and of course the obligatory grunt vocals and blast beats. The attack continues with splendid ‘A Wall’ and ‘Akatheeb’, which features a guest appearance by Rajeh James Khazaal, bassist / vocalist of the Dubai based Death / Thrash band NERVECELL; which is a downright explosive assault of obliterating drums work, violent riffing, and a harrowing vocal assault. And, within full-on bone-breaking devastation mode, Middle Eastern melodic accents can be heard which made way for a whiplashing guitar solo, then shifting into high gear again, racing and ravaging in breathtaking fashion. That offers an excellent demonstration of their song crafting ability, also an aspect of apparent simplicity. Even when the songs take a slower tempo, they are still effective like ‘Slaves Of The Sacred Rites’ well anchored in a pleasant melody and ‘RIP’ takes the same path by unveiling a very different dark patches while ‘Fateful Rite’ starts with a classical guitar as METALLICA did earlier and top to bottom hideous ‘A Bunch Of Bones’ and ‘An Impetuous Choice’ (featuring Julien Milbach of DEHUMANIZE); altogether made the whole album damned strong from beginning to end with a skilled mix of pulse-pounding, technically striking Death Metal viciousness and deeply stabbing melodies. In “Apocalyptic Fate” NIHILISM has amply demonstrated what they are capable of crafting and deserved many spinning as it’s simply raised the merit of French Death Metal. Explore more about the band at www.facebook.com/nihilismdeathmetal  and visit their label page www.facebook.com/greatdanerecords.