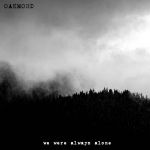 Finnish’s Funeral Doom Death Metallers OAKMORD have arrived on the scene with their 2020 debut album “We Were Always Alone”. The two-member band consists of drummer Juergen Froehling (formerly of bands MY SHAMEFUL, NEOCOSMIC and FALLING DOWN) and guitarist / vocalist / bassist Sami Rautio (formerly of MY SHAMEFUL, WRATHCHALICE and CARDINALS FOLLY). The album itself consists of 4 tracks with a run time of just over 30 minutes. Let’s dive into this debut and see what these guys bring to the table. The album starts with the song ‘I Pray To Unforgiving Skies’ with its slow progression the song at first impression sounded like an instrumental piece until the vocals kicked in after the 1:30 mark. The vocals have a guttural meets raspy sound, not the typical Death guttural vocals one would expect from a Funeral Doom band. Some good guitar riffs and the drums sounded very crisp. The song fluctuates from almost slowing down to the point where you think the song is fading out to a sudden rush of guitars and vocals. You can feel the emotion in the 8+ minutes. Track 2 ‘Dilution Of Pain’ starts off a bit harsher than the previous song, here is where I think the band starts to stand out. Clean vocals appear throughout the song but more of a narration type vibe and it bounces off the harsh vocals that are also here. The chugging guitars really setup the atmosphere and brings to mind a bit of DOOM:VS. ‘Deliverance’ follows up and is also the longest song of the entire album clocking in just 1 second shy of the 9 minute mark. Things start very slow just like on the first track and begin to pick up at about the 2 minute mark. The guitar hooks on this song really captured my mind and took me on a journey (one thing about Funeral Doom that I love are the guitar hooks that just carry on). This was my favorite song on the album as it gave the band the platform to show their stuff. Wrapping things up is the song ‘My Eyes Reflect Only My Death’, this was a more lively song compared to the rest and yet kept the essence of the previous 3 songs. Overall this is not a bad debut. I liked it, but it didn’t blow me away. I have to say that the production on this album is solid and you can clearly / distinctly hear each instrument. I think the band has a lot to offer and will only get better with time and future releases. Again, it’s not a bad album by any means, it does follow the common Funeral Doom formula and now they just need to tweak the formula a bit to find their unique sound. Its really hard to ruin Funeral Doom and these guys did a good job with this debut. I think fans of Funeral Doom should give these dudes a chance and keep an eye on them. For more info: www.facebook.com/oakmord-ex-my-shameful-435614530570382, www.wroth-emitter.org