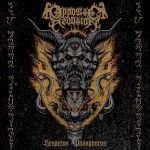 This is the debut album of this young Mexican Black / Death Metal horde, and what a fantastic release we have. Formed back in 2011, and after releasing a demo and an EP, they have developed their sound from cavernous Black Metal, to this intense, extreme and blasphemous Metal that takes the best elements of evil ritual Death Metal and brutal Black Metal in a style not far away from ARCHGOAT or AETERNUS with sounds not far from DEICIDE or SHUB NIGGURATH. And to add insult to injury that fiery sound that only bands like SARCOFAGO and early SEPULTURA can create. But then add to it a killer performance and a great production, with a very distinctive guitar sound. The vocals are also a highlight here as they cross between low brutal screams that would make INCANTATION proud, to evil shrieks that would make DARKTHRONE to doe more evil Metal again. The band has this atmosphere, that calls for a ritual and invocation sound, that if demons from another dimension appear, it will surely be not by mistake. Also to notice the way the band is able to play in many different tempos, and the ease they show, changing from one to another. They do add some pieces of old school evil Thrash Metal to their sound, thus giving them that ancient sound. I feel that the Death Metal side is a bit stronger on this one, and actually that makes them even more Black, and as weird as it might sound, it works for the better. The overall aura and essence that this recording possesses reminds me of those 90s demos, where the bands tried to create the most vile music on earth. At the end of the day, this is just a supreme Death / Black Metal release with a sound of their own no matter how many influences converge within, and truly a devastating force to be recognized. Must mention that both that digipak version and the tape version have very impressive presentation. A vinyl release will hopefully follow soon, but meanwhile if you are black at soul this must be in your collection. www.facebook.com/oppositedevotion, www.detonation-distro.net