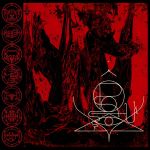 ÔROS KAÙ from Belgium grab a rusty bucket full of black oozing tar and demon’s blood (plus some drops of liquorice schnaps for the taste) and empty it over your head. Bam! And before you even realize where that life-denying stuff came from somebody lights up a match and you are burning like a dove trying to take a dump in a furnace. Bam and zschhh. Without polite introduction track one ‘Zepar’ opens the record as a dark and fast blastmonster, a rough mix of PORTAL, fast INCANTATION and maybe DEAD CONGREGATION. It is neither pure Black nor Death Metal, just crushing bleakness and planets fighting for the right to be Skeletor’s home. As eyes adjust to darkness, shapes of monstrous and epic riffs crystalize (or better onyxize) before your eyes err… ears, both dissonant and majestic, technical and quite eerie. The second song ‘Shax’ even has some EMPEROResque moments. Very cool. I have no information if this is a one man project or an actual band but I guess it is the first mentioned, for the drums sound programmed, but so effectively that you won’t notice, I promise. It is self produced and I think ÔROS KAÙ had exactly this sound in mind before they started, although sometimes I can’t help thinking that a little bit less muddiness would have helped getting into the record more easily. But even I have to admit: the sound fits perfectly. There are different types of vocals, all rather slow than corpsegrinderishly fast, a spooky blend (in a good Scotch way) of MARDUK’s gnarly voice and especially IMMOLATION’s timbre, very much Ross Dolan like in some compositions. Hell yeah. Belgian multi instrumentalist Déhà recorded the vocals so I would not be surprised if he added some of his own ideas and saliva. Track four ‘AešmaDaeva’ finally lets us breathe for a second to extinguish the flames with non-alcoholic (our brains might be squashed already but we are not stupid!) fluids, just to turn around and rub some salt and vinegar into our burned skin – a great epic moshing behemoth of a song. Track five ‘Furfur’ puts us into this vicious, seemingly out-of-control blender again and mercilessly crushes us into pieces that even Emperor Palpatine would have had trouble fitting us into some black-masked suit with a cape to help him terrorize the galaxy. And then, finally, peace awaits: our burial: a 7:32min long PINK FLOYD cover of one of their early songs (1968, when Frank was just two years old – ups was I supposed to mention that?) (Too late, now I will have to kill you! – Frank) ‘Set The Controls For The Heart Of The Sun’ with mesmerizing clean vocals and an etherial and somehow disturbing all-over feeling. What a perfect way to close this cool and dark record. LBNL (last but not least) the artwork fits the music, so all in all a band you should check out if your socks are black, your underpants are black and you prefer black pepper over red. https://oroskau.bandcamp.com, www.facebook.com/epictural