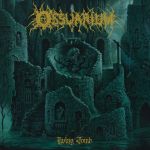 OSSUARIUM are a Death Metal band spawned in Portland, Oregon when guitarist / vocalist Daniel Kelley (GRAVE DUST, DRAGKHAR) and drummer Ryan Koger (TROLL) united by mutual thirst of exploring the elderly and enduring essence of Death Metal. They initiated their snarling journey by independently releasing a demo “Calcified Trophies Of Violence” (2017), which was later re-released by Blood Harvest records on both a pro tape and CD format in mid 2018. Following up with a split release, now OSSUARIUM surfaced again with their debut full-length “Living Tomb” via prestigious 20 Buck Spin (GHASTLY, TOMB MOLD, ULTHAR, BONE SICKNESS, VASTUM), renowned for introducing bands and releasing albums that garnered plenty of rightful praises and support around. “Living Tomb” was recorded under the supervision of Oakland’s evil wizard Greg Wilkinson (AUTOPSY, NECROT, VASTUM, UNDERGANG, ULTHAR, HIGH ON FIRE) at his Ear-Hammer Studios. It seems that within the production of modern period old school Death and Doom Metal, Wilkinson knows the subtle art of balancing and OSSUARIUM benefited profoundly from his fascinating understanding of dynamic ranges and subtle melodies within the context of Death / Doom music. While the Doom side of this release is beyond firm, the Death Metal portions are just as stiff yet cohesive. The energy of the record is maintained over the slower tempo which allowed the thick and moldy tones to seep in under the skin which will attack with a ferocious and engrossing mid-tempo take on the D-Beat pattern, which is OSSUARIUM’s own specialty and kept the course on the same path from ‘Blaze Of Bodies’ till ‘End Of Life Dreams And Visions’ and you are going to find yourself lost in the swirling majesty and otherworldly quintessence of writhing in emptiness. To describe the total essence of “Living Tomb”, Daniel Kelley expressed in one interview that – “I think the artwork really does a great job of summing up what the album is all about. You look at the artwork and Dan Seagrave did such a good job with it. You see right off the bat that it’s creepy and there’s a dark atmosphere. You look a little closer and you see the weirder, kind of out there pieces that are more detailed. I think it’s a good analogy for our record”. Daniel Kelley also expressed that, the lyrical content of the record is dedicated to his late father. When an artist can translate those grave wounds into a liberating listen, a major step forward in personal expression must have been achieved and such emphatic effort will surely reach the spirited souls of early to new era of Death and Doom, from PARADISE LOST to SPECTRAL VOICE. OSSUARIUM’s “Living Tomb” will be available on LP / CD / cassette and via digital platforms and this shall be just the beginning of many more ahead. More about the band at www.facebook.com/ossuariumdeath and visit their label page at www.20buckspin.com