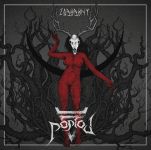 With POPIÓŁ (Polish for “ash”), we have a new band from Southern Poland. Two years of composing and rehearsing passed after their formation in 2017 until they released their first sign of life with a full length album called “Zabobony” (means “superstition”). Musically, the five-piece is dedicated to Pagan and Folk Metal, yet they spiced up their style with a lot of Black Metal, some elements of Doom Metal and even a very healthy dose of Gothic Rock in the vein of FIELDS OF THE NEPHILIM. The result is distinctly darkened music full of hidden beauty and subtle harmony that evolves with every spin you give it. The opening tune ‘Wybiło’ is a rather blithe start, yet the sadness already shows its face here. With ‘Gdy Słońce Zgaśnie’ we have a song that lives up to its title, for it translates “when the sun goes out”. And this meaning is caught in the atmosphere of the song, even though sometimes the sun seems to reappear. ‘Wilcze Jagody’ is a beautiful and quiet instrumental interlude that paves the way for the dark ‘Ojcze Nienasz’ with lots of quiet parts that often reminded me of the already mentioned FIELD OF THE NEPHILIM. The pretty long and dark ‘Chmury’ might be the song on “Zabobony” that is rooted the deepest in recent Black Metal and finds its contrast in the quiet, heavy-hearted ‘A Kysz’. The desperate atmosphere of the long and break-laden ‘Umarli’ already hints on a dark end to this album. And with ‘Czerń’ (which translates as “black”), “Zabobony” finds a very dark end, darker than black so to say. Even though, or maybe especially because it is very quiet, the song spreads sadness and despair. Thus POPIÓŁ have found a very fitting end to an album, that is pretty unique and refuses to be categorized. Those not afraid of gloomy music that crosses borders visit either www.facebook.com/popiolofficialprofile or www.godzovwar.com