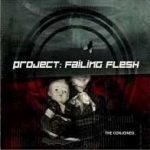 PROJECT: FAILING FLESH already made pretty much impact on me a couple of years ago with their debut "A Beautiful Sickness". I always had a weak spot for the Canadian band VOIVOD and back then I was very curious how ex-VOIVOD vocalist Eric Forest would sound like in his new band. "The Conjoined" is the second PROJECT: FAILING FLESH album and is even more experimental than their debut. The voice of Eric Forest is still very easy to recognize and gives the material a very aggressive character. There’s also a certain VOIVOD-touch on this album which makes it even more interesting in my opinion. "The Conjoined" differs a lot from all the average Metal-albums out there. This is mainly caused by the very unconventional song-structures as almost each song has a lot of breaks, tempo-changes and some unusual instruments like the trumpet or a bombastic orchestra. The whole album has a very futuristic and somehow a bit industrial-sounding approach (it reminds me a lot on MINISTRY to be honest) thanks to the use of samplers and electronic effects which really suits the music. My favorite tracks are probably ‘Eve Of Demise’ (it has some really cool and furious blastbeats and mid-tempo parts), ‘Through The Broken Lens’ (reminds probably on VOIVOD the most), ‘Synesthesia’ (has a certain threatening touch like the more slower Morbid Angel material also has) and the closing track ‘The Hand You’ve Been Dealt’ which after one minute turns into an excellent Thrash / Death Metal piece. Somehow, the first impression I get from this album is the same feeling I had when I heard the PESTILENCE album "Spheres" for the first time. "The Conjoined" is definitely not an ‘easy’ album to listen to. And I can imagine that – because of the sometimes unconventional song-structure and the weird mix of styles – it will probably not appeal to everybody out there. But those who are really willing to give this a try won’t be disappointed. Because isn’t it often, that albums that you have to listen to more often to get used to, turn out to be the most interesting and lasting in the end? www.projectfailingflesh.com