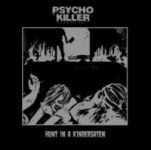 The first thing which you recognize on this release is the spelling mistake on the cover: "Kindergaten" should be "Kindergarten". This is for sure a mistake as the name of the song is written correct in the booklet: ‘Go To The Kindergarten (As A Chinese You Shall Uderstand)’ => damn, another mistake. I shouldn’t focus that much on things like that, so let the music do the talking. PSYCHO KILLER from China are playing Grindcore, well-produced, well-played and in a way quite original. The sound here is great for this type of music as it sounds really natural, especially the drumsound is awesome. PSYCHO KILLER is a sideproject of Song from the best Chinese (Death) Metal band (if you ask me) CHAOTIC AEON and I have to say, even if I think PSYCHO KILLER are doing a very good job, I would appreciate it more if the guys would focus more on their main band. 13 songs of Grindcore, brutal, fast, technically very good performed and overall quite entertaining especially as everything is well played and offered with lots of interesting ideas (just listen to the psychedelic part in ‘Go To The Kindergarten’) – so if you like that and if you want to have your first Chinese Grindcore CD in your collection this is a good possibility as it is a good recording, as simple as it is. Nevertheless I would prefer another CHAOTIC AEON release first! Check out PSYCHO KILLER here: www.myspace.com/limbogrind.