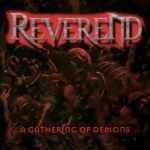 The last recording we got from REVEREND, the band David Wayne founded after he left METAL CHURCH back at the end of the 80s and did some splendid releases with, before taking a new stint in METAL CHURCH, before doing this last EP with REVEREND, before releasing a couple of albums under the moniker WAYNE, before his too early demise, RIP! We are getting the 4 tracks from the EP remixed, into a sound reminiscent of the METAL CHURCH 80s sound, which I don’t really know if I am a fan of. On these tracks it is of course charming and it fits the band like a fist in glove, back in the good old days. Wayne’s vocals are very much on top and somewhat more high pitched than the original mix, the guitars a tad more faded, even though shrieking higher, the drums and bass are quite powerful, and perhaps a tad too forward, compared to the guitars, which makes the soundpicture a tad unbalanced for me. Though I like the more powerful and balanced original mix, even though it is a tad more compressed, it makes it more intense and in my face. A mix which also is present on this release. Take a listen, and judge for yourself, both mixes are good though, it’s hard to pick, haha! As a bonus we get a blistering and intense version of UFO’s classic ‘Lights Out’, where Wayne really is displaying his powerful vocals and range. There are two live tracks from San Antonio, Texas, perhaps from the last gig REVEREND did, not far from Wayne’s death? Powerful and gripping live, as on the studio recordings, we truly lost one of Metal’s biggest voices way too early! There is also an outtake from some vocal recordings, which is fun to hear, though doesn’t give that much to the release, besides a testimony of David’s massive vocals on a raw recording! REVEREND took off where Wayne left METAL CHURCH, powerful and energetic Power Metal with thrashy progressions and heaviness and a tad of Speed Metal fretting here and there. And this last output of the band is just as powerful as two full length albums “World Won’t Miss You” and “Play God” from ’90 and ’91. This is prototype American heaviness with one of the greatest vocals ever, and this release is worth picking up, even if you have the original, due to the new mix, ‘Lights Out’ and the live tracks! Enter the metal church: www.facebook.com/reverend-2243067239239928, www.vicrecords.com