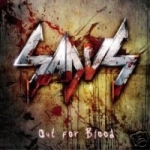 So, dear Saduses, why are you so angry? Not only can we see you on the back sleeve as three angry motherfuckers, but the music you’ve rehearsed for “Out For Blood” bears witness of a band that has struggled throughout the years. Hmm, would I think that if I hadn’t known? If Sadus was a new band with “Out For Blood” being their debut? Well, not to give you any illusions, “Out For Blood” consists of way more than mere elements of anger. But to be frank with you, I kinda thought that after their former album I suspected that Sadus was swallowed in black. Now, this didn’t turn into the review I had planned from the beginning. The cheesy way of naming each Sadus full-length just came to my mind like that. Oh, just when I was about to forget it I came to think that this new album is not a vision of misery either. So, what is “Out For Blood”? It is an angry album with heavy hitting tracks that are just so cool. Just take a listen (when you get the opportunity) to the Pantera-driven ‘Down’. If Darren Travis had a more brutal vocal instead of the crispy harshness we’re accustomed to via the previous Sadus albums, I am sure Dimebag would bang his head wherever his grave is. However, “Out For Blood” is not an album that is Pantera-angry. It’s closer to Slayer-angry, if you see what I mean. Of course you don’t if you haven’t heard “Out For Blood”, and if you have, well, then you’d better do something else than reading these words. I mean, doesn’t it feel like I’m going “blah-blah-blah”? Of course I could mention Steve Di Giorgio’s bassassination. Due to the crystalball clear production, you can every single hit on his strings. There’s always something going on in the world of Di Giorgio’s basslines. And, I could mention Jon Allen’s precise drumming. But instead I’d rather tell you a short story. When I heard their ultrafast “Illusions” (also wickedly renamed as “Chemical Exposure” in 1991), which was recorded numerous basslines ago, I found it extremely intense, but the riff I liked most was the break in ‘Fight Or Die’. What such a cool break did to me in the go-ahead-play-faster album you can just imagine. I remember I listened to the album only for that hook. The rest of the album was, after all, monotonous. Now, on “Out For Blood” there are such hooks all over. It’s like an overload of hooks. It’s cool and all that, but in the end it looses some effect. Luckily, though sadly for me personally, they’ve included a couple of straight-to-the-point tracks, with ‘Sick’ as the most dissatisfying song on the album. But the effect this song has on the album is favourable, meaning that I’ll appreciate the breaks and hooks more. If “Out For Blood” were 15 minutes shorter I’m sure the score would be close to 10. I mean, “Out For Blood” has everything. It’s just that it has too much of everything… in the end. (the CD also features a pretty interesting 12:17min long video documentary about SADUS in the studio and there’s a limited edition version available that comes with a bonus disc, including two covers by IRON MAIDEN [‘Invaders’] and DARK ANGEL [‘Merciless Death’] as well as a remastered song from 1994 [‘Black March’] – Frank). Links of interest: www.sadus.tk, www.mascotrecords.com.