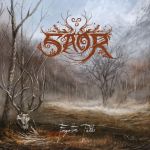 Saor is the Irish and Scottish Gaelic word for "free". SAOR, the Scottish one-man band is the brainchild of Glasgow’s Andy Marshall, formerly of FALLOCH. After his debut, he left the band to pursue his own vision of Caledonian Black Metal and through his already impressive discography, SAOR have perfectly translated the magnificence, unforgiving nature and conflict of Scotland’s landscape and history into an engrossing musical format. The wild, but at the same time atmospheric mix of Folk and Black Metal that Marshall releases under the SAOR banner appeals to the imagination. The long, stretched songs sound grand, exciting and enigmatic; as a perfect musical metaphor for the rugged Scottish Highlands. It is not surprising that the band has since found shelter with Avantgarde Music, the label that offers accommodation to high-quality bands. It all started with the enchanting debut "Roots", released in 2013, which hinted the incredible and distinctive potential, culminating in the third installment "Guardians," which unleashed a unique, folksy magic. Congregating the fantastic Folk-Heavy approach of “Roots”, the raw passion and energy of “Aura”, and the masterful songwriting of “Guardians”, with the new album "Forgotten Paths", SAOR moved towards a more diverse direction. First of all there is the sound, "Forgotten Paths" does not sound like a one-man-project; everything sounds more than competent, and all instruments have space and sound amazingly natural. Recorded and edited by Reni McDonald Hill at Fortriu Studios, Falkirk, Scotland and mastered by Justin Weis at Trakworx Mastering & Recording in San Francisco, California. This new album, with a playing time of almost forty minutes, is SAOR’s most compact album to date. It is also noticeable that “Forgotten Paths”, perhaps with the support of a larger label, is their best produced album to date. Comparing previous productions, this newcomer sounds imaginative and colorful, but at the same time sufficiently rough and cold, with that you can almost see the misty Scottish highlands passing by in your mind. The Folk elements – provided by a range of guest musicians – are also very harmoniously incorporated into the overall sound; the most intriguing contribution is made by Neige (ALCEST), who livens up the title track by taking care of the vocals during a great, melodic piece, both clean vocals and screams. The raspy rough vocals are the evil part of the mixture while the instrumental side is more melodic and atmospheric. While, ‘Monadh’ is reminiscent of certain SÓLSTAFIR moments with its opening tones, ‘Bròn’, on the other hand, is a completely different beast, probably the darkest track of the album serves with ominous prelude and stomping rhythms. Though, at the roots, SAOR is a Black Metal band, Marshall effortlessly shakes off the shackles of genre guidelines, by channeling a variety of influences into a sound that is as atmospheric, hauntingly beautiful and emotional as it is heavy, dark and abrasive. “Forgotten Paths” should actually be able to appeal to all followers of ENSLAVED, ALCEST, MOONSORROW and PRIMORDIAL. Explore the band at www.facebook.com/saorofficial, label contact: www.avantgardemusic.com