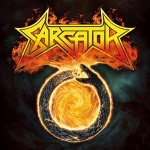 These young Swedes have a very promising future ahead of them if this SARCATOR debut album is anything to go by. I am reminded a lot of fellow Swedes HYPNOSIA in places, but also bands such as THE CROWN, MERCILESS, KREATOR, DARK ANGEL and riffwise even a more aggressive blackened version of classic FORBIDDEN. Absolutely stellar musicianship and the riffing is tight, with the two guitarists unleashing hook filled riffs galore throughout. There is some teutonic technicality on display too, which definitely has a KREATOR vibe and the drums are energetic and pounding with 17 year old drummer Jesper Rosén already showing his powerful percussion prowess. He also uses roto toms which adds more authenticity to the old school blackened Thrash attack. The bulldozing bass bludgeons the senses to make you feel like you have been hit full force and knocked senseless by this extreme aural aggression! The awesome vocals are an incredibly aggressive brutal mix of lower growls and higher blackened rasps that are spat out with a caustic confidence which belies his tender years age wise. Vocalist Mateo Tervonen is only 15 years old but if you didn’t know any better you’d think these vocals were unleashed by someone quite abit older and more experienced! The production / mix / mastering job by Marko Tervonen from THE CROWN (who’s aforementioned son impressively handles both, the main vocals and guitar duties in the band) must be mentioned here as he has provided a heavy, weighty, sharp sound to compliment their aural onslaught which has a lot of depth to it. Every instrument cuts through the mix clearly with the precision and deadliness of a freshly sharpened scythe. SARCATOR have produced a savage sonic aural assault full of hefty hooks that embed themselves in your head like an axe. And if there is some justice in this world theywill go onto bigger and better things. The future of Metal is definitely in safe hands if this album is anything to go by. Speed Kills But Who’s Dying?! Only your hearing! www.facebook.com/sarcatorband, www.redefiningdarkness.com