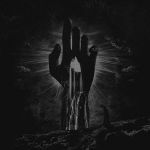 France’s SEKTARISM returns with “Fils De Dieu”, which roughly is a year after their previous release. The album consists solely of 2 songs (‘Oderint Dum Metuant’ and ‘Sacrifice’) and spans just over 44 minutes. This is my first time checking out this band and figured the next question would be if the songs would keep my interest or if they would drag. The first song is a tribal-ish drum banging jam that is really dull and without much to grasp attention. You get the howling of the vocals from time to time but overall it was a song that did not need to go past the 3-4 minute mark. I kept hoping that the song would lead into a something more but again just a repetitive set of trial drumming. I could see this as being an outro type of song. The last song takes a different approach with having a Doom-ish atmosphere and slow-downtrodden guitars. This song should have been the one to kick off the album as it really lets the band standout. The harsh vocals provide another layer to the music and really stand out on this song. About half way through the tempo changes and drifts into a drone-guitar filled haze which morphs back to the original formula. This is the type of Doom that catches my attention. My overall impression of this album is middle of the road and would need to hear some of the band’s back catalog to reserve judgment on my impression of the band. The album itself, well as I stated above, I thought the first song could have been way shorter and maybe made into an outro. ‘Sacrifice’ was really good and was the redeeming item on this album in my eyes. If you are checking out this band for the first time with this album, I would suggest you check out the second song first to avoid starting on the wrong foot. For more info: www.facebook.com/sektarism, www.noevdia.com