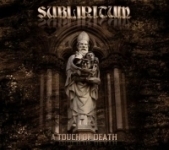 SUBLIRITUM
A Touch Of Death
(Battlegod Productions)
35:39min
Trondheim, Norway, is undoubtedly a great place for Metal bands. They obviously must have some special vitamins and other ingredients in their drinking water that make them a bit more superior to the others – at least if this Norwegian 4-piece technical and atmospheric blackened Death / Thrash Metal band SUBLIRITUM can work out any proof for all that. SUBLIRITUM also features two members from another Norwegian extreme noise patrol KEEP OF KALESSIN, Vegar ‘Vyl’ Larssen taking care of the drums as well as Torbjørn a.k.a. Thebon as guest musicians. What comes the most important thing on the band’s 2nd album, titled “A Touch Of Death”, which is naturally the music itself, I cannot help comparing them to two other Norwegian extreme Black Metal acts when listening to this record. Namely during the very first spin of “A Touch Of Death”, it was GEHENNA’s “Malice” (in sense of atmospheric parts) and SATYRICON’s "Nemesis Divina” (in extremity of Black Metal’s viciousness) albums that flashed in my mind more than just a couple of times. But gladly there’s more in SUBLIRITUM’s musical approach than just those couple of aforementioned Norwegian bands’ influences. SUBLIRITUM’s approach to extreme side of Metal is way more Thrash-orientated, which can be heard through the whole album. The riffs and solos have sometimes a very Thrash-feel to them, making their road to Hell a bit more special and rewarding both for the band members and the fans of this type of stuff for sure. There’s grunty Death and Black Metal vocals – as well as some clean sung vocal parts in the songs that create a nicely working contrast on the record, accompanied with some catchy keyboard parts whose role to bring more depth and atmosphere to the songs, make this task well accomplished. What’s even greater, the songs stand out amazingly well and painlessly on their own, having enormous amounts of kick-ass elements incorporated into them – and they are overall tightly played, providing a chance for this record for some intense nonstop rounds in people’s CD-players. Therefore I can only make a fair statement that SUBLIRITUM has a very good chance to become the next big thing coming from Norway’s already fantastic extreme Metal scene. I, for one, hope they will achieve all that that rightfully belongs to them: A taste of success and fame, added with a snippet of fortune, too. Killer. www.myspace.com/subliritum, www.battlegod-productions.com
Luxi Lahtinen