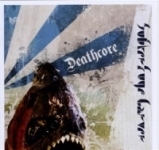 With “Deathcore” we get the debut record of this band from the area of Stuttgart, Germany. The promo sheet writes more about their success during contests then something about the music but the title gives a good direction. Deathcore or Metalcore with a little bit Death Metal is the musical direction I think. So you get the genre typical mixture of screaming and growling and clean singing over deep Thrash riffs and powerful drumming. And here I have to say thumbs up for Alex Wiedhölzl and the variability of his vocals. The riffs sometimes remind me a little bit of PANTERA and also especially the beginning of song number eight ‘P**** Gunner’ sounds a little bit like DOWN and Mr Anselmo; not only the riffing, also the voice and melody line. What song number ten – ‘Prelude To War’ is for, no idea. Short and unnecessary instrumental, which nobody needs. Sorry. In the end the songs are all well arranged and the musical skills are above all doubts covered by a very good production of Andy Classen in his Stage One Studios. But this is not really my cup of tea. Sorry again. So if you are a fan of this genre you should risk an ear at www.myspace.com/subterfugecarver or www.s-c-r.de