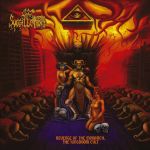 "Revenge Of The Monarch, The Kingdom Cult" is the first full length album from SUGGILLATION, a young band from Brazil, specifically from the state of Mato Grosso Do Sul. Almost 43 minutes for eight tracks of unripe old school Death Metal. The band – a power trio – was born in 2014 and this is its second release to date, because its debut studio session is an EP recorded in 2016 and called "Necro Suggillation Tantric Spawn". Since SUGGILLATION come from Brazil, I would have expected an ultra brutal and fast band in the vein of KRISIUN, but unfortunately this is not the case. Here we have a pretty minimalist and raw form of old school Death Metal with a strong satanic imagery. Honestly, this album is not exactly memorable and is not well played, but has some enjoyable moments. I would define it as a "so bad it’s good" CD. The sound production is solid, as well as the guitar distortion and the audible bass. The vocals are pretty reminiscent of Glen Benton’s ones: sick and diabolic. There are many slow parts with a quite macabre touch, alternated with some faster ones. The latters are the weakest point of "Revenge Of The Monarch, The Kingdom Cult", due to the redundant and uninspired riffs as well as the very poor drumming, especially the uncoordinated and clumsy blastbeats. If I had to compare SUGGILLATION with another band, I would say that they’re the Brazilian answer to PATHOGEN, but the Filipinos have for sure a greater mastery of the instruments. In conclusion, Brazil has tons of killer Death Metal bands better than SUGGILLATION, just to name a few: FUNERATUS, MENTAL HORROR, REBAELLIUN, OPHIOLATRY, ABHORRENCE and POISONOUS. By the way, I think that SUGGILLATION might actually have potential, on condition that they’re able to leave behind some cheesy solutions in the songwriting and to improve their musicianship. All verdicts are postponed to their next album: good luck! www.facebook.com/oldschoolsatanicdeathmetal, www.facebook.com/ibdc666