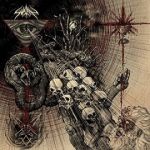 "Awakening Of The Mighty Flame" is the first full length album from SVATAN. Here we have a pretty young band from the south of Brazil, in which members of various unknown Brazilian acts are involved. A five-member project that in this first album, originally self-released on June 2016 only in digital format, offer us almost 33 minutes of polished and melodic Black Metal. Too bad, because I was waiting for a Black Metal band in the purest South American tradition and not a melodic clone of the Scandinavian sound. Forget legendary names such as SARCOFAGO, HADEZ, INQUISITION, early MYSTIFIER etc, because "Awakening Of The Mighty Flame" sounds more like a mixture of DARK FUNERAL and DIMMU BORGIR. However, SVATAN seem pretty known in Brazil, since the first album has already been re-pressed a couple of times and they’re actually signed with an important underground label like Drakkar Productions. In terms of musicianship this is a solid band and the production is very professional too, but they play a form of Black Metal that is too artficial for my ears. There’s a heavy use of keyboards and clean vocals in the melodic parts; something that sounds very boring. The brutal and violent side of their music is present in the blasting accelerations and in the double bass galloping parts; here they’re pretty reminiscent of early DARK FUNERAL efforts, "Vobiscum Satanas" for example. What else? Well, the occult and anti-christian lyrics don’t add anything to the whole offer, nor the artwork is memorable. In conclusion, yes, SVATAN has the potential of becoming a mature band, but they ought to reduce significantly the melodic whining in favour of a more brutal approach. www.facebook.com/svatanofficial, www.misanthropic.com.br