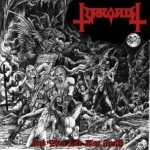 TERRORIST
And Then Life Was Death
(Morbid Metal Records)
31:02min

From the very first moment I started researching about this band, I liked them for reasons not musical. TERRORIST are from El Paso, Texas, the home state of former US president George "Double-Fuck-You" Bush, who always said his aim is to fight terrorism (despite being a terrorist himself). I’m pretty sure these guys were one of the favorite bands of the NSA from the moment they started… Returning to the unpolitical levels, TERRORIST seem to be rooted in the old school of Black Thrash Metal. Started in 2005 by the only remaining founding member Freddy Terrorizer, they released a few demos to date, along with two split EPs and an album in 2008, called "Blessed By The Beast". Five years later, TERRORIST returned with their second full strike "And Then Life Was Death", an album that should please any lover of blackened Thrash Metal with a positive 1980s attitude (the album also features another founding member, drummer Cesar "Thrashing Hammers" Palacios, who plays with CREMATORY DIGESTOR now – Frank). The opener ‘Sadistic Necrophile’ shows the way TERRORIST walks: primitive riffing, simple songs, very raw production and short, to-the-point songs. No technical shit, no pieces of skill, no overdubs… That’s why I like them for musical reasons as well. There even is a Punk attitude present, this nice "Fuck Off!" feeling I liked about early Thrash Metal. The intention of TERRORIST is refreshingly simple: they want to revive the days when Black Metal was still shocking big time, when technical skills and extreme music were like fire and water. The songs and the sound transport this message, and it is addressed to all those who always loved, still love and will ever love the simple old school of Thrash with attitude. They all need to check www.terroristthrash.webs.com and www.facebook.com/pages/terrorist/164218303639409 or the label at www.facebook.com/morbidmetalrecords