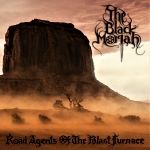 A black / thrashing attack is what these Americans deliver. This is their second full length, their debut “Casket Prospects” was independently released in 2012, followed up by a CD reissue and a vinyl release in 2013. Now seven years later the band is back with a vengenace, a vengeance served cold by German Folter Records. Quite old school in both the thrashing pieces and the Black Metal parts, where especially the Black Metal parts brings forth thoughts to the Scandinavian scene, in the late nineties and early zeros, and the Thrash parts brings back nostalgic feelings from when Germany ruled that part of the scene. It is often melted quite well together with intensity and energy, and when the parts stand alone, it is also quite good. The songs are well crafted and the music is delivered quite well. This is by far not a groundbreaking album, though a solid piece thrashy darkness with power and intensity, with a dusty nostalgic feel to it. Delivered straight up with sheer energy and conviction, though a tad more blazingly cold darkness on the Black Metal side of things, wouldn’t bother me. The cover version of GORGOROTH’s ‘The Devil Is Calling’ from the ’97 “Under The Sign Of Hell” album is also delivered quite well. Ride with the sons of hades: www.facebook.com/theblackmoriah, www.folter666.de