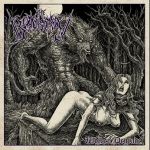 THE BLACK SORCERY’s second album is a particular morsel to chew. This Black / Death Metal band from Canada leans towards what is usually labeled War Metal but not in a typical way, since the main vocals are sung using the typically Grindcore pig squeal technique (usually done inhaling) with the addition of some gurgled undead-like backing vocals. Also, they are dirty and chaotic, but their music is not the massive storm delivered by bands like BLASPHEMY and the likes, even though they can get very fast and brutal such as in ‘Angry Spit Of The Witches Piss’. They are not really tight, the very rare guitar solos are quite primitive, and they wear their influences on their sleeve, with hoodies, flamboyant corpsepaint and spikes wide enough to get your tyres through any blizzard. The cover artwork depicts a werewolf doggy-fucking (or should that be wolfy-fucking) a naked girl on a kind of tombstone in a forest under the full moon, and it’s of course very similar to the artwork in SARCÓFAGO’s ‘Satanic Lust’ demo (later re-done for their “Decade Of Decay” compilation CD). The production is raw but not overly distorted at all, so you can clearly distinguish each instrument. The vocals took me some time getting used to, since they are not what I would expect but in the end I found myself getting the musical picture and there were even some tracks I particularly enjoyed, such as ‘Worse Still The Fog Of Man Settles’. If you like this chaotic Black / Death Metal, this one may very well suit you. Learn more from www.facebook.com/the-black-sorcery-133516247446955, www.krucyator.com