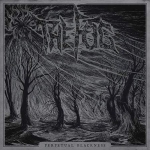 "100 years ago, between midnight and one, something evil came out of THE FOG – now it has returned" – stated some ghastly voice in a trailer of a certain horror classic back in the days. This time it didn’t take 100 but only 2 years for THE FOG to return in the shape of a full length record released by the Spanish necro-lords of Memento Mori Records. As some of you might know (probably only the Germans among you), THE FOG consists of Mr. NOCTURNAL / FRONT BEAST / SHRINE / TERRORAZOR / ANGEL OF DAMNATION and what feels like a zillion more projects on drums, a former member of the promising Death Metal militia BEYOND on guitar / vocals as well as some unknown bass player. Basically a quite promising constellation, right? Wrong! I mean not completely wrong but still not as good as I thought it to be. To be honest I’m not a big fan of any of the millions and millions of projects Avenger calls his own, but when somebody who actually knows the drill turns towards one of my favorite genres I definitely got to give it a listen, while having something one could call “higher expectations”. Unfortunately “Perpetual Blackness” turned out quite a bit over-hasty even though it only creeps out of ones speakers with not more than 30bpm. The overall idea behind each and every song is pretty good to say the least but due to the lack of gripping songwriting and the resulting absence of killer riffs the songs just dabble along. Nevertheless the record still has its positive sides by sticking to the formula of delivering straight, bare bones, no artsy fartsy bullshit Death Metal the way it’s supposed to be. Too many bands nowadays try to be intellectual or spiritual while playing music they would have hated themselves 5 years ago. It definitely would be best to give this record a try to see if it fits your taste or not, but don’t expect something which comes close to the mastery of the likes of WINTER or DECOMPOSED among others. Click www.facebook.com/thefogdoom or www.memento-mori.es