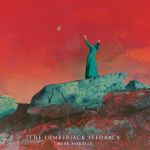 Over the past few years, France became quite famous in insider circles for their blooming and creative Metal scene. Bands like ALCEST or GOJIRA are well known around the world by now for playing unique and very fine music that can hardly be compared. And the underground is also blooming, just take a look at the fantastic Black Metal scene in France. Of course the underground is not only Black Metal. As an example we have THE LUMBERJACK FEEDBACK, a quintet from Lille. Their line-up alone is pretty remarkable, since it features two guitar players, a bassist and two (!) drummers, but no singer. Yes, THE LUMBERJACK FEEDBACK are a mere instrumental band. Listening to their second full length album “Mere Mortals”, I do not think that this a good idea, since the musical direction of THE LUMBERJACK FEEDBACK really asks for a singer. Based in Doom and Sludge styled Metal, the band really has some fine compositions with cool riffs and atmospheric, even psychedelic parts. Especially the two-parted ‘New Order (Of The Ages)’ is a fine example for both riffs and atmosphere. These songs are the ones in which I miss the vocals fewest of all. But despite all the fine ideas, most of the songs are often enough endangered to become one dimensional elevator music when I listen to them due to the missing dimension of a vocal performance. And that’s not what was originally intended I guess. In case you are more a friend of purely instrumental music than me, THE LUMBERJACK FEEDBACK might be of interest for you. Check them at: www.facebook.com/thelumberjackfeedbackband, or visit their label: www.deadlight.fr