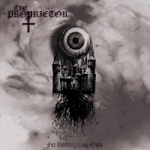 THE PROPRIETOR
For Nothing Is My Own
(self-financed)
39:44min

THE PROPRIETOR are two guys from New York. At first I thought this must be one of those “mystery” bands judging from the lack of info online. No Facebook page, misleading and incomplete data in Encyclopaedia Metallum… but then I read the bio on bandcamp and found one of the guys on Twitter. Are they perhaps aiming at these days’ younger audience, who have no Facebook because their parents are there? Anyway, this is the debut album, after an EP released in 2016. It sounds good. It’s pretty much Norwegian styled Black Metal, with its typical guitar playing style and raspy vocals. It has good riffs and an aggressive sound. Good vocals, sometimes sounding much tortured such as in ‘Time Without Pity’. They have an intro and outro with a cello (or whatever it is) and along the album they show their likeness for ambiance, such as in the piece called ‘And Those Who Were Seen Dancing Were Thought To Be Insane By Those Who Could Not Hear The Music’. The production is bass- and reverb-ridden, it allows you to clearly hear everything that is going on but they still sound as if they were playing inside a tube. Everything is very well and precisely played, and it’s very neat sounding, not grim or chaotic at all, in spite of the production. Somewhat simple music yet melodic and carefully laid out, with often interesting guitar work. It sounds primitive yet polished at the same time, a kind of elegant Norwegian Black Metal if I can put it that way. A fine album! Hear the sound of these American Blacksters at: https://theproprietor.bandcamp.com, https://soundcloud.com/the-proprietor