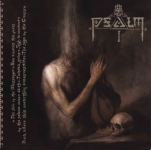 THE PSALM is a Death Metal band from Greece rising from the ashes of NOCTURNAL VOMIT, who existed from 1999 to 2016 and delivered a full-length and a number of demos and splits. ‘I’ is a mini CD that Repulsive Echo Records just released, and it is an extended version of the EP that THE PSALM released in 2015 (on cassette and 7”). It adds to the original two tracks, that are about seven minutes long each, a ROTTING CHRIST cover (‘The Mystical Meeting’, originally recorded for a Metal Hammer tribute to the band – the Greek version of the magazine still going strong these days), and also a short track from the NOCTURNAL VOMIT days, and a live version of a song that will be on the forthcoming debut album, here recorded at a gig supporting ASPHYX in 2016. The live recording does not have the best sound quality (sometimes it even seems to have an mp3 compression effect) but it allows a preview of what shall be coming. As for the actual musical content of this release, it begins by reminding me of classic stuff like Mexico’s CENOTAPH, including the doomy tendency. And indeed, we soon realize that the focus in Death / Doom territory doesn’t prevent them from running a wide gamut of Death Metal, including some intense speed. As soon as the singer starts singing, though, the comparison to PESTILENCE and mainly ASPHYX becomes inevitable, because the similarity to Martin van Drunen is remarkable. The songs seem to deal with occultist themes, as also their logo and great cover artwork hint at. Even though this release is a relatively short introduction, it is a high quality one, with fine production, a heavy sound, and very competent musicianship. A great sounding mini CD, and a definite recommendation for any fan of old school Death / Doom. Pursue the occultist trail into: www.facebook.com/psalmdeath, www.repulsiveecho.com