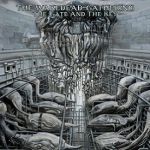 THE WAKEDEAD GATHERING
The Gate And The Key
(I, Voidhanger Records)
39:43min

Most one man Death Metal bands totally suck!!! There are only very few around which are really good and one of those projects is THE WAKEDEAD GATHERING. And to make it clear, THE WAKEDEAD GATHERING is not just a good one man band, it’s a brilliant band at all. Andrew Lampe, the mastermind behind it, is a sophisticated musician and composer and he delivered a fantastic piece of dark and wide-ranging Death Metal. This is outstanding atmospheric and heavy as fuck old school Death Metal which is mainly mid paced or slow but with several fast outbursts. It would not be fair to compare THE WAKEDEAD GATHERING with any other band because it is too good and has too much originality but to give you a hint what to expect I would say if you love the mood and intensity of early 90s blasphemous Death Metal bands such as INCANTATION you definitely should check out THE WAKEDEAD GATHERING. Andrew Lampe composed some fantastic dark and brutal hymns. He created an obscure, weird and nightmarish atmosphere so “The Gate And The Key” would be an appropriate soundtrack of any Lovecraftian story. This is definitely not one of your typical new wave of old school Death Metal clones, this is an album with its very own note and the best thing is that this album grows every time I listen to it. It truly becomes better and better… So, now stop reading and buy “The Gate And The Key”… you won’t regret! www.facebook.com/thewakedeadgathering, www.i-voidhanger.com