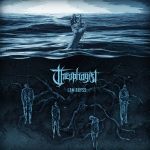 THEOPHAGIST
I Am Abyss
(self-financed)
43:13min

Founded in 2015 by a group of friends, THEOPHAGIST symbolizes today the reincarnation of a project long believed dead. Picking up where they left off a decade ago, THEOPHAGIST brings to you some of the most engaging Death Metal made in Luxembourg. THEOPHAGIST has its roots in the years 2007 – 2009, when most of the members – Jo Conter, Michel Conter, Ben Schreiner and Sven Schosseler were making music together under a different name. Actually, ‘Apocalypse (Redux)’, the last song on the album “I Am Abyss” was written during that time. My first thought when I heard about THEOPHAGIST was THEORY IN PRACTICE and NECROPHAGIST but theophagy actually means the sacramental eating of a god typically in the form of an animal, image, or other symbol as a part of a religious ritual and commonly for the purpose of communion with or the receiving of power from the god. THEOPHAGIST clearly seem to have taken the path as if they’ve now been given powers for having committed theophagy. This is a fine debut for the Luxembourg band. The band mixes in melody with ease to their heavy chuggy riffs that run through start to finish. They’ve stuck to what I would call a modern approach to Death Metal. The band builds up an entire atmosphere of fast, distorted riffs that can easily weigh down on a room full of fans. The riffs are fine, the vocals are deep, the drumming is adequate, but when they all come in together the band manages to add in another angle to raise their entire game. Although the band sticks to the traditional riffing they also manage to step aside as seen on tracks like ‘Recipe For Human Cake’ which frankly hits home! I wish they took this parth more frequently as that would really push THEOPHAGIST to the next level in my opinion. On the whole this is a promising debut by the Luxembourg band. I hope they’re signed on to a label for their next release and receive widespread press. I’m positive a lot of fans would absolutely love this sound and flock to their gigs. For more info please visit www.facebook.com/theophagistband, www.instagram.com/theophagistband or https://theophagist.bandcamp.com