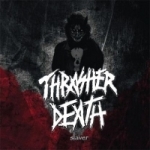 THRASHER DEATH
Slaver
(I Hate Records)
62:35min
History lessons are usually great and informative, also when it comes to lessons in Metal! THRASHER DEATH is a Polish band that roamed in the mid-80s and later on transformed into PSYCHOTRON, a band that searched out a different approach than the raw Speed Metal and early Thrashing sound that THRASHER DEATH was dwelling in. Apparently THRASHER DEATH was reformed back in 2008, with no gasps or screams from the band yet. Besides this anthology of the band’s early material, direct from the cool Swedish label I Hate Records. The release is consisting of THRASHER DEATH’s 2 demos “Women Die” from 1988 and “You Must Kill” from 1987, on top of that we are getting previously unreleased tracks from when the band was named SLAVER and a track recorded during a live session in 1988. “Slaver” provides a good stroll down memory lane, to the good old 80s, damn I can’t help feeling a tad old and a tad too nostalgic when listening to music as this. Unimpressed thrashing and speeding madness from a band that is ready to conquer the world. Quite good musical skills, there are some really good guitar work here and there, just check out the noisy dual leads in the superb instrumental track ‘Women Die’, godly. Together with the insane rhythm patterns and general good songwriting. I guess THRASHER DEATH was one of those good bands that died due to them being on the wrong side of the iron curtain, as this release sports some really good tracks and intelligent songwriting, together with some good musical performances. Of course not all the tracks keep the same standard, though generally the quality is high – and the, I guess, direct transfer from the old tapes without too much cleaning, except from gain mastering, suits the music really well, raw and pounding, going straight for the listener’s throat! A serious lesson in the merge of Speed Metal and early Thrash and the Polish Metal scene in the mid-80s is what this release provides, and of course an hour of great Metal and following neck pains, what more to ask for? www.myspace.com/thrasherdeath666, www.ihate.se
Anders Peter Jørgensen