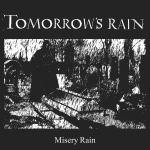 TOMORROW’S RAIN from Tel Aviv got my attention already some weeks ago when I saw the list of contributors to their debut album “Hollow” which leaves two options. Good network and connections and respect in the underground or just namedropping to promote the material. The first thing seems to be the right one as the band offers a very good and matured debut. The taster ‘In The Corner Of A Dead End Street’ convinced me already. I started my Death Metal career with listening to all kind of Doom and Gothic Death Metal stuff and nowadays I am pretty critical when it comes to that kind of stuff as most of the bands nowadays simply sound boring and wimpy. Bands like AMORPHIS, ANATHEMA, PARADISE LOST but also MY DYING BRIDE, DARKSEED and ANATHEMA really were my world and since then hardly any band managed to recreate these kind of atmospheres again. Maybe DRACONIAN managed that on their debut. Anyway we are here to talk about TOMORROW’S RAIN and I must admit that they really deliver very solid stuff. Their approach is not as raw as the mentioned old masters and also due to the geographic origin, the material is closer to MOONSPELL then any of the mentioned bands, but surely delivers the melancholic touch I often miss when bands play this style. Well-dozed keyboards meet good grunts, normal vocals, heavy guitars enriched but strings and mid-east vibes so the material definitely is diversified. Also the compulsory female vocals really are not disturbing or overdone. Apart from the pretty solid songs, worth to mention definitely is the solid, powerful and clean production, which flatters the good songs. ‘A Year I Would Like To Forget’ is a pretty good example for the solid songwriting, damn good solo and with its KATATONIA vibe it is definitely a lot better than what we got from the Swedish dudes on their last effort. Mentioning one single song is not necessary as all tracks are solid with no flaws and all of them have some very good ideas and in the little specials in each track you can hear how much time they have spent to work on the tracks. As September is close this good debut is the right material for the coming autumn and worth to check for everybody who likes melancholic Doom / Death. After PARADISE LOST and DRACONIAN the next good album in a row this year. For more info, please check one of the following sources: www.facebook.com/tomorrowsrain, www.facebook.com/aoprecs