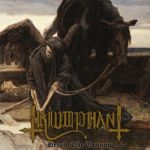 While their name might be familiar, this is actually a brand new band, formed in 2013 in Austria, and "Herald The Unsung" is their debut album. Allright, for the record, they were previously known as MANIC DISEASE, but they have a new line-up, new songs, a new band name, so we need to consider them as a new band. What do they play? Metal. Pure Metal. Or pure fuckin’ Metal, if you don’t mind. It’s hard to put them in one bag like Thrash or Black, or Heavy Metal, as actually we can hear all these genres here: blasting drums and ultra fast rhythms bring to mind names such as DESASTER, NIFELHEIM or even DISSECTION and WATAIN, but at the same time they manage to put some really cool sounding classic Metal riffs and harmonies here and there. The aggressive and growling vocals are mixed with some high pitches screams, like taken from the first SLAYER album, and even clean vocals (like in the last song on the album titled… ‘Triumphant’). It’s also worth mentioning that their compositions are really well composed and thought over, and the album – while quite old school – sounds really good and transparent. Good job guys. And yes, the only one right format for Metal of this kind: vinyl. You can choose between black vinyl, limited to 350 copies, and dark yellow vinyl, limited to 150 copies (incl. free band patch). More information: www.facebook.com/pages/triumphant/416160448500983 and www.heavy-forces-records.de