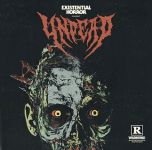 The promotion says “They won’t stop until the total world domination. Beware the unholy power of the UNDEAD… the hunting has begun!”. Well, I am not convinced, but let’s take one thing at time. “Existential Horror” is the debut by Death Metal outfit UNDEAD, based in United Kingdom and Spain. Founded in the year 2013 the band released two EPs so far and all nine tracks are new songs. What really looks great is the cover artwork, drawn by Pol Abran, the “Armani of Doom” as he has been called by journalists and fans. He also runs Branca Studios, where bands from different genres have recorded their albums, although UNDEAD decided upon Tore Stjerna at Necromosbus Studio, Stockholm, Sweden. Which leads directly to one reason why I am not confident about the above advertised world domination. The sound is a little too sterile, too polished. For me a typical example of modern recorded and mixed music missing rough edges and intensity. Same goes for the music itself. From an objective point of view the band did everything right. We have up-tempo beaters, songs with dynamic and impelling songwriting and slow crawling ones. The vocals are delivered in a form of aggressive grunting, but without any memorability. And this aspects brings us to precisely to the crux of the matter. UNDEAD did everything correct when it comes to record a Death Metal album. But for me one of the most substantial characteristic is missing – the recognition value. To me it seems everything on this album I have heard countless times before. And therefore on an objective evaluation a standard Death Metal album, but for my ears boring. But since reviews always reflect the personal opinion, every Death Metal fan may visit www.facebook.com/curseoftheundead or www.godzovwar.com to form an opinion.