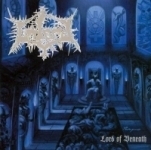 Third and final offering from these “mysterious” Northern warriors (well, I guess they are Dutchmen anyway), “Lord Of Beneath” turns out to be a very enjoyable album. And it is simple to explain why: UNLORD play a rather raw form of Black Metal, with some late 80s vibes (quite logical if you keep in mind that the band was formed in 1989) and without the prettiness and the inane “musical experiments” plaguing the vast majority of the present days releases. And even if you can hear some keyboards here and there, the core of the music is nothing less than a barbaric and impious assault against the ears. The production on this album enhances the impact of the music, the drums especially sound fat and powerful (a rather scarce occurrence on a Black Metal release nowadays) and the guitar parts shred like chainsaws. Each of the 13 tracks on offer here (actual songs with lyrics and some instrumentals) shows its own identity and flavor, with the result that “Lord Of Beneath” appears as a very diverse and interesting album, even fresh I dare say. The running time accounts for the shortness of the songs, don’t expect lengthy (and boring) “hymns” , but rather sudden outbursts of unholy dark rage. I can’t say that UNLORD will let an unforgettable mark in the Metal history, but at least they come up with a very tasty musical approach, dusting off some elements of the past to give them a new shine. If you are looking for authentic Black Metal done with sincerity, I think “Lord Of Beneath” is for you. The lame cover artwork painted by Petagno (give the man a little rest!) is the only let down I could mention.