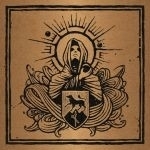 Folk Metal. Black Metal. Post Rock. Doom. And now the combination: Black Folk Doom Post Rock Metal. Or short: VELNIAS. You like that? Nature & misanthropy? Rock’n’Runes? Then don’t switch channels. These US dudes have been around for quite (@Frank: yes!) (@Tim: hell yeah! – Frank) some time, since 2007 to be precise. ‘Scion Of Aether’ is their third full-length in 13 years, their second ‘RuneEater’ is already from 2012. That is eight years but what you get are six songs. Two of them are short atmospheric instrumentals with reverb guitars, toms, folky (not in a funny sense) melodies – Barbarians will like that, when they are in a melancholic mood that is, thinking of the old days while gazing at stars, carving runes into bones after a nice raid and some proper burnings. The other four tracks are different. Between 9 and 15 minutes VELNIAS take their time to built them up – this is where Post Rock comes into play. Sometimes close to being jams, often a little bit chaotic, but nonetheless well played. VELNIAS know their instruments, maybe too well it seems, but more about that later. ISIS come to mind or AGALLOCH and SOLSTAFIR. The riffs are rocky with some blackened harmonies but without the fast guitars and beats, more in the mid-paced area. Maybe some old OPETH? At least the vocals remind me of that band and of old AMORPHIS. Well, it is hard for me to point out exactly what this band reminds me of exactly, but maybe that is to their advantage. Personally it does not grip me. The guitars often play against each other, building moments of chaos and dissonance, but not in a grim or spooky way. There once was a band… wait, I’ll have to dig deep… an ANATHEMA and CRADLE OF FILTH amalgam… THE BLOOD DIVINE! Yes: they also had these long parts, where seemingly the band was playing together, but you could hear that the left guitar plays what it wants (in German there is a word for that: ‘dudeln’) and the right guitar does the same. They only come together when the song goes from loud to quiet and vice versa. And the bass player paid good for his or her playing lessons and now has to show us all learned skills. Only the last track ‘Oblivion Horizon – Null Terminus’ offers some parts where this larger-than-life feelings gazes around the corner, like a shy animal, big eyed with a soft fur and shaky legs just to get run down by four silverbacks on their Highway to Walhalla – or Skull Island when we want to stay in the the gorilla metaphor (gorillaphor?). Live there is a 60:40 chance that this band kicks ass, the intensity and playing ability is quite high, but on record it’s simply not enough. A less muddy sound perhaps? I don’t know. I don’t get runes. www.facebook.com/velniascult, www.eisenton.de