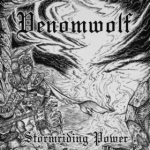 VENOMWOLF are a Black / Thrash / Punk Metal one-man band from Scotland. Duncan McLaren is that man, and he provides everything. Judging from the sound of it, it is really him playing a real drumkit, which sounds very organic and not very technical, other than the usual programmed drums in bands of the like. The whole recording in fact sounds very genuine. This debut album for Iron Pegasus Records features 14 short-ish tracks (little more than a half hour total) of Metal with often very punky riffs and a production that is somewhat backwards but fits this kind of music like a glove. With titles like ‘Dogs Of Darkness’ or ‘Addicted Sadistic’, you know what to expect. Sometimes a bit more Black Thrash, like in ‘Impaler’, or then more Black Rock’n’Roll (a bit like GEHENNAH) mainly in ‘Graveyard Violence’, truth is, despite some variation in the songs, VENOMWOLF bring nothing new… but they do bring a great headbanging album. The songs are well-composed and interesting, with catchy riffs and rabid vocal performance. Even some keyboards in a couple of tracks sound great. It all reaches your ears like true primeval rage-fueled, in-your-face Metal. If you are into stuff like MIDNIGHT or early TOXIC HOLOCAUST this will be certainly worthy of your attention (and speaking of TOXIC HOLOCAUST, the mastering was done by none other than Joel Grind). The album ends with their very own rendition of JAGUAR’s classic ‘Axe Crazy’. For more information check their page at www.facebook.com/venomwolfmetal, or their label at: www.iron-pegasus.com