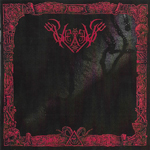 VEXEV
Frater Superior
(Under The Sign Of Garazel Productions)
34:33min

VEXEV is an Italian band that is shrouded in mystery, as no one knows when they formed or who they are. This is actually their fourth demo, and they have been releasing music since 2020, so basically it’s a new band. Well I’m using the term band loosely as I think this as well might be a one man band. “Frater Superior” features very long songs, and most of them have long atmospheric intros, except for track 4, that is just a passage. Then when the music hits we have some very basic form of Black Metal. Back in the 90s Black Metal bands sounded the way they did due to lacking good equipment, studios and basically how to play. Well VEXEV tries to capture that spirit, but with let’s say, more decent production values, and a very weird, dreamy guitar tone, which reminds me of the Swedish band URKAOS. The drums seems to be a drum machine, very plastic and lifeless, and also mixed way too much in the back. And the vocals are not that far from early BURZUM if maybe a bit less screaming. The band goes from very fast to a more mid-tempo aura, yet the music itself shows me nothing I’ve heard before. I can appreciate the dungeon Middle Ages aura, yet the plastic drums and the common riffs did nothing for me. Black Metal has many faces, VEXEV is one of those and I’m sure that there will be fans out there that appreciate this style more than I do. They released this on CD and cassette and I must say that the artwork is very good and fits the music. I just tend to find it a bit boring, although here and there some riffs actually work. https://vexev.bandcamp.com, www.facebook.com/utsogp