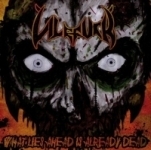 VILEFUCK
What Lies Ahead Is Already Dead
(F.D.A. Records)
37:27min

Death / Thrash Metal, a hybrid of two styles that has never been accomplished, save a few exceptions. Usually bands labeled as said sub genre tend to play either one with some minor influences from the other one. But this is not the case with VILEFUCK. Hailing from Sweden, formed in 2004 and with 5 demo releases under their belts (enough to develop their sound), their debut full length album “What Lies Ahead Is Already Dead” is a great example of how to play Death / Thrash. These guys play old school, crust influenced Thrash Metal perfectly blended with the overall Death Metal atmosphere including haunting melodic / harmonic guitar lines, some blastbeats and overall aggressiveness! A beast of an album, full gruff shouted vocals, great riffing, tempo changes, tight drumming, short but tasty leads and enough subtle variations to keep you interested and craving for more. Personally, I would have liked a heavier guitar sound, but one can’t complain since the crisp production fits in nicely. Their lyrics are based on political and social views, continuing the SACRED REICH / VIOLENCE legacy. Most of the songs are consistent and there are no letdowns here. Maybe my faves songs are ‘Fuck The System’, short but aggressive as hell and ‘Invisible War’ featuring some brilliant riffing full of ‘mosh’. VILEFUCK is definitively a band to look out for in the future. With such a good debut release, they can only get better! Contacts: www.myspace.com/vilefuck, www.fda-records.com