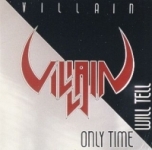 Very first official release on CD for this album (not really – there has already been a Japanese CD version a couple of years ago – Frank) originally issued in 1986 which has reached the cult status over the years mainly because singer Carl Albert joined VICIOUS RUMORS later. VILLAIN delivered some strong Heavy Metal with “Only…”, covering Power Metal fields with ‘Kamikaze’, ‘Kids Of Crime’ or ‘Thrills In The Night’ or more accessible areas with ‘She’ll Make You (Fall In Love)’ or ‘Just Close Your Eyes’. In fact VILLAIN were extremely close in sound to V. R. and all this material would have easily found its place on any early V.R. albums, not surprising that their singer and bassist later joined V.R. haha! Only the cover ‘Tie Your Mother Down’ fails to impress to say the least, a basic boring rocking tune. A very good re-release but I would still be hesitant to call this cult somehow.