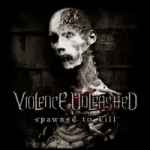 VIOLENCE UNLEASHED hails from Germany but their style of Death Metal is definitely American or contemporary CANNIBAL CORPSE to be exact. I am not trying to write these guys off as mere clones but they sound remarkably similar. Before you lump these guys in with countless other bands who play this style of Death Metal it should be noted that they do it extremely well. Since I had never heard of them before I decided to go on their website to get some background info. A couple interesting things that I found out included that this band is really the work of the guitarist, Felix Schumacher. He basically wrote all the music and then got some session artists to come in and help him record the album. This is also their debut album so I was pretty impressed considering this. I also immediately noticed that the drummer of the band is none other than Yanic Bercier of QUO VADIS (Canadian not Polish). This guy is a beast. I didn’t recognize the other guys but it was obvious that they were no slouches. To sum it up, although this music has been done countless times before, at least these guys do it well. If you worship newer CANNIBAL CORPSE then you should enjoy this. You can find more about the band here: www.violence-unleashed.de