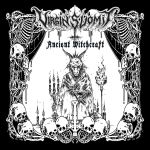 Brazil’s VIRGIN’S VOMIT (who are also members of ATOMIC ROAR) have been around since 2014, but are finally delivering their first release, “Ancient Witchcraft”. And before we go any further, let me just say how much I love the band name. If I had an award to give, they’d win it. Having said that, VIRGIN’S VOMIT are sort of what you’d expect with Brazilian Death Metal… an ugly, putrid, filthy sound that feels like it was illegitimately born from the bowels of a pus-filled bloated corpse. But in a good way, of course. There’s no warning to the sudden jolt of first track ‘Triumph Over Enemies’ The guitars reverberate with a madness not unlike a screaming lunatic in a rotting asylum. The vocals sound like gravel being ground up in a death-machine. The drums are a multitude of stomping imps barreling through the sewers. ‘Demon Bite’ is pretty similar, as ‘Autopsy Of The Holy Ghost’ is an even more furious display of speed and fueling anger. With VIRGIN’S VOMIT, I feel like I’m in a dive bar in the middle of an ongoing apocalypse where no one inside gives two fucks because they’re too busy banging their heads and boozing up. I could go on and on with song descriptions. But you get the idea. The songs keep a similar kick-ass tone throughout the twelve tracks and almost 30 minutes of music. Time isn’t wasted as the band is in and out before the no-longer-virgin is even aware of what happened. “Ancient Witchcraft” is Metal at its grimiest. It’s literally non-stop thrashy Death Metal in the primitive way it was intended. Let’s hope it’s not another six years before their next release. For more information, check out www.facebook.com/virginsvomit, www.facebook.com/mutilationrecords, https://hellmusicrecords.bandcamp.com