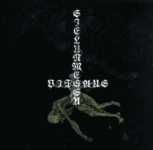 Passionate traditional Black Metal is what Finland’s VITSAUS deliver since the band’s foundation “under a funeral moon” shortly after the turn of the millennium. Now, after a quite promising demo compilation album in 2004, “Sielunmessu” marks the band’s first full-length and referring to good ol’ DARKTHRONE’s 3rd studio effort was of course intentionally since influences from the Norwegian cult can not be denied and amalgamate successfully with hints at HORNA (with whom VITSAUS drummer Vainaja plays since ca. 2006), early BURZUM, old GORGOROTH. Thus, groundbreaking elements are hardly to be found on this album and the five overlong songs mostly remain free of any pleasant or unpleasant surprises. “Sielunmessu” is a barrage of Nordic Black Metal riffs and chords that evoke a perfectly grim atmosphere, whereas vocalist Inho screams at the top of his lungs and flawlessly transports a heartily felt hatred and contempt for everything bright and peaceful. Apart from worshipping Satan, Black Metal has always been fuelled by the darkest, soul-devouring emotions imaginable and VITSAUS convincingly channel their innermost bleakness during the simple vehicle named ‘Black Metal Song’. Stylistically the latter has been achieved a thousand times before in a comparable manner yet its filth-ridden honesty never fails to impress. Tag this: No-bullshit Black Metal! www.myspace.com/vitsausofficial, www.hammer-of-hate.com